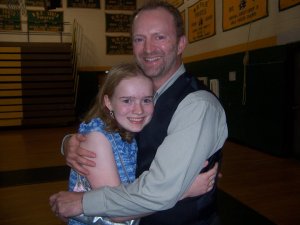 It was late summer, 1994.  I had just closed an amazing run of “Grand Hotel” and was about to open as John Adams in a beautiful production of “1776” directed by my good friend, Erick Devine.

Malisa and I had been married for two years and things were moving ahead brilliantly, just like we had planned.  She was finishing up her undergraduate studies and I had one more year of graduate school.  Then it was off to New York City!  We weren’t even remotely ready for what happened next.

When Malisa showed me the test strip with the matching red plus signs, I just stood there.  So did she.  This was not in the plan right now.  In a few years, sure, but not now.  We weren’t ready. 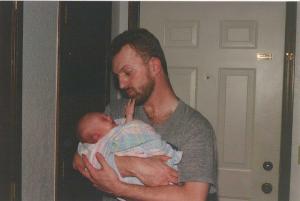 I’m sitting on the beach in Delaware, looking down to the water and watching my now 18 year old daughter splash in the waves.  I want to get up, run down and hug her.  I want to pick her up and swing her around like I used to do when she was four.  She’s still small enough for me to do it, but I won’t; too embarrassing! (“You’re so weird!!”)

I’m trying not to pay any attention to the date.  If I do, I’ll realize that we’ll be dropping her off at camp (ok, college.  There, I said it!) in less than two weeks.  Of course I’d seen this day coming, but I wasn’t even remotely ready for what happened next.

Cut to two days ago…

The university she’s attending is only an hour away; one hour, door to door.  It’s nothing to blubber about.  She’s ready.  She’s going to do amazing things in college and in her life.  I’m incredibly proud of the woman she’s become, and I have no reservations about her readiness to leave the nest.  It’s nothing to do with that.

Nobody tells you when you’re learning to change your firstborn’s diaper that one day, when the time comes to let her go, you’ll miss a dear friend.

At every stage of her life, there would be someone older than me who would see us together and would stop me and say, “This is THE greatest age!  It was my favorite age with our daughter!”  People would say that virtually every year.  I took that in and really tried to appreciate every stage of life as she was going through it.  Admittedly, not every stage was a favorite of mine, but that’s life, it’s always going to have its ups and downs

So it was, with all of those stages behind us, and a brand new stage right in front of us, that I gave her one last hug before getting into the car and watching her wave goodbye in the rear-view mirror.

There was nothing else to do but leave.  I’m just in the way, now.  I realized that it was what I was destined to do all those years ago.  My job was to get her to the stage she’s in right now and, truth be told, it’s my favorite.  But, I used to say that virtually every year.

I seem to remember someone once saying something along the lines of, “Just when your children get to the age where they’re actually interesting, it’s time for them to leave home.”

Well, my daughter has been more than interesting at every stage of her growing up with us, and she’s given me more treasures to store up in my heart than a man should be allowed.

I’m just not sure there was anything I could have done to be remotely ready for what happened next.

A Public Sphere for Poetry, Politics, and Nature: over 400,000 monthly users

Where I race to the chocolate bar

Real living of a genuine faith in Jesus while our world watches...

Words About God, Life, and Coffee

a blog archive experiment about the Nelson fam on Springvale Drive

“Let me not pray to be sheltered from dangers, but to be fearless in facing them. Let me not beg for the stilling of my pain, but for the heart to conquer it.” ― Rabindranath Tagore