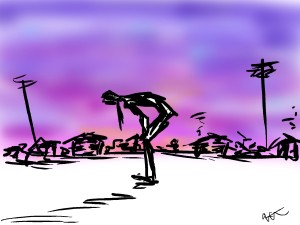 I haven’t run in three weeks, not a step.  I’ve been suffering from vertigo.  I’ve been dealing with that for over a year now, so I’m not really sure why it’s got me down lately.

In fact, I went to the doctor about it (finally!…I know, I know).  She gave me some meds and told me to up my vitamins, so…

The thing about the vertigo is that it comes on so randomly.  I can never predict when I’ll have an episode.  It only lasts for about ten seconds every time and I can feel it coming on, but it’s just so random.

When vertigo strikes, it comes out of nowhere.  I could never put my finger on what was causing it.  At first, I thought maybe I was dehydrated, so I drank plenty of water and it still happened.  Randomly.  Then I thought maybe I was just looking at my computer screen for too long, but that wasn’t it, either.  Maybe the new vitamins will work.  We’ll see.

That’s what happens when I stop running for too long.

I had been training pretty hard for the Philadelphia Marathon but had to withdrawal because of the vertigo and the lack of down-the-stretch training.  That hurt, having to withdrawal.  I felt like I wasn’t in control of my own body; I couldn’t tell it what to do like I’ve been able to do pretty much my entire life.

I’ve been on the vitamins for a few days now and I don’t feel much different, but I haven’t had another episode, so there’s that.

I’ll get back out there, maybe later today.  Will something bad happen?  Will I have an episode in the middle of a run and have trouble getting back home?  Maybe.  But if I don’t try, I won’t ever know.  What I do know is that I’ll drink too much, write too little and feel too depressed about things I know I can’t control.  I don’t like myself when I get like that.

I don’t like myself when I’m not able to run.

Scott Langdon is an actor, writer, and photographer living just outside of Philadelphia in Bristol, Pennsylvania with his wife, Sarah, and their dog, Watson. He can be seen on stages throughout the professional Philadelphia theater community or writing in one of his many favorite local shops in his beloved "Borough", where the only way they could get rid of him was to tell him there was a pandemic. He has a hard time knowing when he's not wanted. View all posts by Scott Langdon

Error: Twitter did not respond. Please wait a few minutes and refresh this page.

A Public Sphere for Poetry, Politics, and Nature. Over 15,000 daily subscribers. Over 6,000 archived posts.

Where I race to the chocolate bar

Real living of a genuine faith in Jesus while our world watches...

Words About God, Life, and Coffee

a blog archive experiment about the Nelson fam on Springvale Drive

“Let me not pray to be sheltered from dangers, but to be fearless in facing them. Let me not beg for the stilling of my pain, but for the heart to conquer it.” ― Rabindranath Tagore